A Rotaractor ventures deep into her native Uganda with a polio vaccination team as part of Rotary’s newest virtual reality film, Two Drops of Patience
Story Written By:
Patience Asiimwe

Health workers must have a lot of passion. They face so many challenges to reach every child with the polio vaccine.

I found that out when I traveled to a mountain community on the border of Uganda and Kenya, 200 miles from my home in Kampala, to join a vaccination team. Just getting to the homes was a challenge, let alone persuading the parents to let us in. We had to park the cars, carry our coolers with the polio vaccine safely tucked inside between ice packs, and move on our own two feet, just walking and walking. It’s a bit of a trick – using your hands to steady yourself while you climb, yet still having to carry this heavy cooler. There were lots of streams and rivers, and at times we had to jump across or walk through the water.

We would sometimes walk for 30 minutes before we would see a home, because they’re not so close to one another. It was lonely and scary, walking through the trees and rocks. The challenge was getting as far as we could, keeping in mind how long the journey back would take. If we walked three hours to get to a home, we needed to be sure we had three hours to get back before dark. And all that with the possibility of not finding a child at home and having to return another day.

At one point I just sat down. My feet ached. I was sunburned – and until this trip, I didn’t think black people could get sunburned.

But we had to keep going to save someone’s life.

I’ve been involved in Rotaract for a couple of years now, but I’ve never done anything quite like this. My mother, Margaret Okello, is a member of the Rotary Club of Kampala Naguru. She saw that I had a little energy that could be used more productively. So she suggested I join Rotaract, which I did in 2016 when I was 21. My club is involved in an adopt-a-village project in Gulu in northern Uganda, an area that saw 20 years of armed conflict.  I’ve been there twice. And our club collects money for polio eradication.

I knew about polio. I had seen victims of the disease. I had been immunized against it. It’s odd, though – it’s something you hear about, but you don’t really get how bad it is. I found there was an opportunity to do something more to help with the eradication efforts through one of my friends, Fred Masadde. He’s a member of the Rotary Club of Kampala Ssese Islands and a Rotary public image coordinator. I decided to apply.

In November 2017, I met the team of filmmakers in Kampala who would be documenting the polio immunization effort for Rotary’s newest virtual reality film. I had to request a week off from my job with the Uganda Cancer Society, where I work finding donors and funds to help with their program activities. We chartered a plane to the town of Moroto, which is way, way up in northeastern Uganda at the foot of Mount Moroto. There, we met up with people from UNICEF and the local government, as well as the Rotarians and Rotaractors who had driven three hours from the town of Soroti and would also be giving polio drops. Since there isn’t a Rotary club in this part of the country, Soroti Rotarians occasionally hold medical camps here.

It was another one-hour drive to Tapac, the community on the mountain where we were to work. I had never been in that part of the country before – it’s more than eight hours from my home by car. I was so shocked. I had only seen places like this in movies and television documentaries.

The poverty was overwhelming. The thatched huts that people live in are built by the women; the men do the cattle keeping. The women harvest long grass and dry it, and also tie together bundles of sticks. Some use the mosquito nets that they get for malaria prevention to tie their things together. Some of the homes are raised on sticks, and the family’s livestock are kept under the house. The doors are so small that you can’t actually walk through them – you crawl.

The health center is up in the hills. It’s really small, and people come to it from miles around. There’s no electricity in that area, but luckily someone donated solar panels to run the refrigerator, since the polio vaccine has to be kept cool. A nurse there taught us about the cold chain and how to place the vaccine in the coolers, and explained how to administer it without contaminating the vial – you have to hold the dropper above the children’s mouths without touching.

Then we went to one of the homes to get some hands-on experience. When it was my turn, I was shaking. I was worried I would make a mistake and drop in more than two drops. It’s like the way you keep blinking when you’re trying to put in eyedrops. The baby keeps moving! So it can be tricky. We learned the way to hold a child’s mouth so it remains open – you kind of gently press the cheeks together. You have to smile, sing to them. You couldn’t come with a tough face – you want the child to feel comfortable with you. And of course the mother helps keep her child calm. 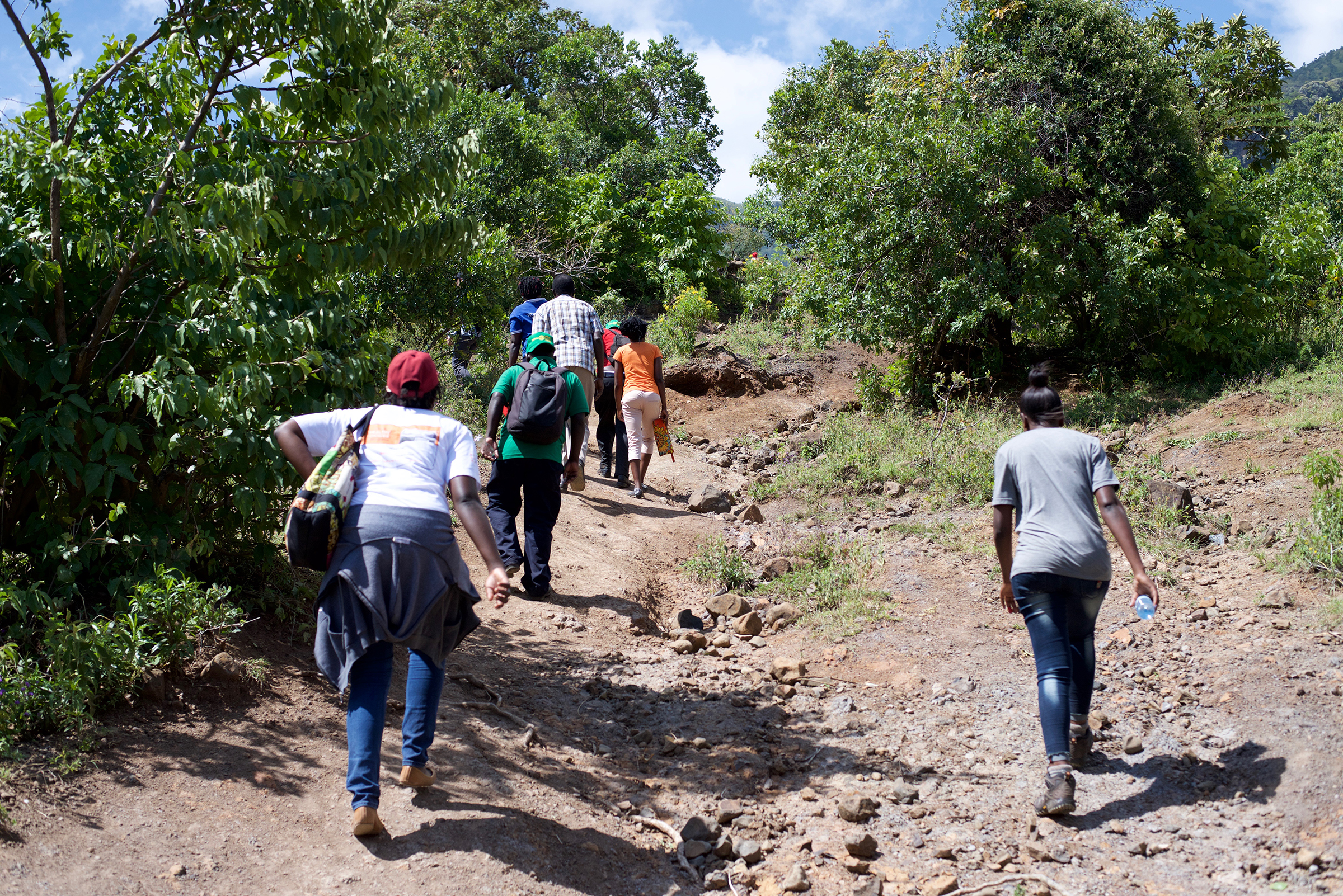 We went up into the mountains the next day to give the vaccinations, but first the film crew needed to talk to people and let them know what was going to happen. Imagine a place where you rarely see visitors, and then you see that camera drone up in the sky. Suddenly people would come out, wondering what was going on.

And because the government has tried to disarm people in the area, which has a history of violent conflict among tribes, often related to cattle raiding, they are suspicious of everyone. They dress differently and do their hair differently, so you can tell an outsider for miles.

We didn’t know that people there believe you are not supposed to climb the trees or sit on the rocks. The people hold them in high regard; they’re sacred. They got angry with us because they thought we were provoking them. This is why, when you go places, you need to know the community well. Because who would think sitting on rocks is a bad thing?

We always moved with the nurse, because people knew her and she knew the language, Ng’akarimojong. We had to tell people why it is important to give the polio vaccine. One father asked me if I wanted to kill his child or if this was a family planning method. We had to spend a good amount of time with him.

I met a man in Tapac who had been crippled by polio. He can’t run. He can’t walk. He can only crawl. When it rains, the water rushes down the mountain carrying rocks and mud. He tries to get out of the way as fast as possible. But he gets stuck. Imagine being an adult and being pelted with rocks and mud. When I met him, I realized that wheelchairs don’t help in a place like this. Wheelchairs won’t get you up the mountain. You need your legs.

When we first started filming, I was focused on what we were going to shoot. But that changed when I did my first vaccination. I felt like a hero. It was a satisfying feeling, knowing you probably just changed someone’s life. I felt I had done something very meaningful. I had prevented somebody from being sick. I had given somebody opportunity. Those two drops felt like a life-changing action. 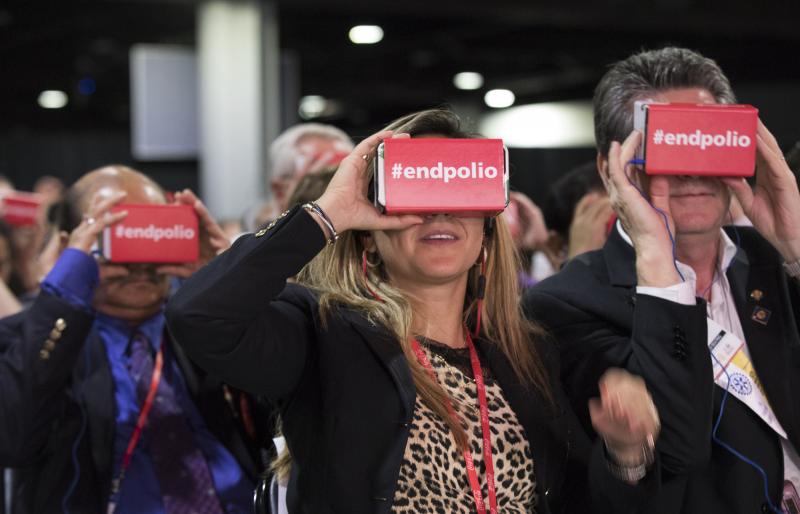