From red ponchos to pub crawls, Rotary clubs are coming up with a variety of ways to promote polio eradication in October
Story Written By:
Arnold R. Grahl, Rotary International

In eastern Ontario and western Quebec, Canada, thousands of Rotary members will put on red ponchos and march through the streets of their towns to raise awareness for polio eradication on World Polio Day, 24 October.

Michael Kinsey, governor of Rotary District 7010, which spans the two provinces, ordered 2,000 of the special ponchos, which include the End Polio Now logo, for members to purchase for $10 each. Half of that goes to Rotary’s PolioPlus campaign, with the other half covering the cost of the poncho. Clubs are inviting local politicians and media to join the event, or holding small rallies to explain Rotary’s role in bringing an end to the crippling disease.

“I thought it was a good idea, but it’s really taking off,” says Kinsey. “Each club will be taking pictures and sending it to our public image coordinator, and we will promote it. Each walk will get a lot of media exposure in the community, and the impact of all 41 clubs in our district doing something is going to be huge.” 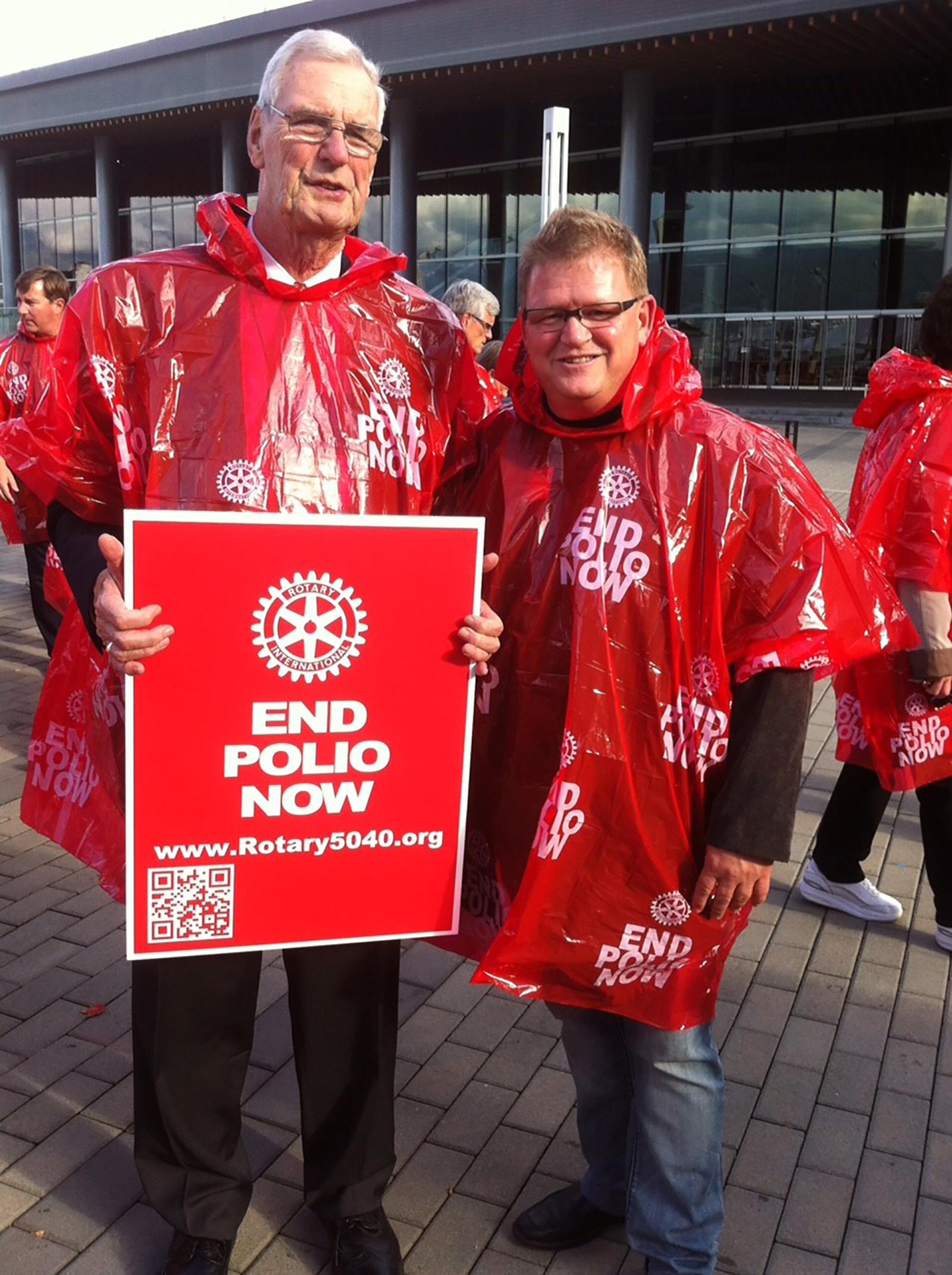 Rotary is encouraging clubs to hold events on or near World Polio Day this year and register the events at endpolio.org. Last year, supporters in 90 countries registered more than 1,400 World Polio Day events.

Kinsey says he got the idea after taking part in a walk with Rotary leaders during a 2011 regional training event in Vancouver. The participants all put on similar red ponchos to walk from their hotel to the 2010 Winter Olympics cauldron, housed at the Vancouver Convention Centre.

“People were stopping me on the street and asking me what Rotary is about and saying how they thought polio was already eradicated,” says Kinsey. “It was an incredible conversation starter and that sparked this idea.”
Kinsey teamed up with the district’s polio committee chair and public image coordinator to send letters to every club in the district. He’s also promoted the idea as he visits clubs.

“Our district is monstrous geographically, and many of our club leaders are used to traveling great distances for events and training exercises,” Kinsey said. “My theory with this was: ‘You don’t have to travel to do this.’ We are not even asking them to walk any certain distance. Just walk in your own community where you think it will be most effective.”

Some clubs are also using the march as a membership drive, holding a social event at the end and paying for a member’s poncho if they invite a friend.

Kinsey’s advice to other clubs or districts wanting to hold an event is to unite resources and find someone with passion to lead.
“If somebody is passionate about something, it’s going to happen,” Kinsey says. “Once you have that, you get behind them and support them and help them in the direction they want to go.”

Here are some other events Rotary members are planning to celebrate World Polio Day this year:

•  The Rotary Club of Simmern-Hunsrück, Germany, in conjunction with the city’s annual festival, will sell several varieties of soup while promoting polio eradication. All proceeds will go to PolioPlus.

• Rotary members in Pollachi, Tamil Nadu, India, will hold a painting competition and oratory contest for elementary school students on 24 October. Students will be invited to a community center to display their work and read their compositions, while getting the opportunity to receive prizes. Posters are being printed in each school taking part in the contest, and raffle tickets are being sold, with proceeds going to support PolioPlus.

• Two Rotaractors are cycling across India to raise awareness of polio, from late September to March. .

• Members of the Rotaract Club of Pacific Beach, San Diego, California, USA, have organized a pub crawl for 14 October with special games, competitions, and discount food and drinks to raise money for polio eradication. Tickets to the six-bar event are $30.

• The Rotary Club of Thorpe Bay, Essex, England, is sponsoring a Purple4Polio benefit concert at the Palace Theatre in Westcliff-on-Sea on 22 October. Alex Mendham and his Orchestra will play 1930s tunes from George Gershwin, Cole Porter, Irving Berlin, and others.

• The Rotary Club of Makati Central, Philippines, will hold a competition to crown Miss Earth 2017 on 21 October, with more than 500 business professionals invited to attend. The club will show videos of Rotary’s efforts to eradicate polio throughout the competition.