Thinking Locally and Acting Globally: The Amazing Legacy of Rotary

When I was a kid in the 1960s — before the interstate highway system bypassed America’s main streets — towns and cities across the United States welcomed road-weary travelers with brightly painted signs sponsored by their local community service clubs. Those signs expressed a well-centered sense of civic pride, but they also reflected a commitment to embrace others with respect, friendship and generosity in the spirit of the Good Samaritan.

Years before the creation of the U.S. Agency for International Development or the Fulbright Scholars Program, community service organizations like Rotary International laid the groundwork for American leadership in the 20th century. They forged international networks of like-minded citizens often separated by country, language and religion — but united in the belief that all lives have equal value and everyone deserves the opportunity to lead a healthy and productive life.

Today, thanks to the hard work and the leadership of more than a million Rotarians around the world, we are rapidly approaching one of the greatest achievements in human history: the eradication of polio. Rotary’s journey to tackle the disease started back in 1979 when it kick-started a program that immunized six million children in the Philippines against polio.

The following year, Dr. Albert Sabin — the legendary researcher who invented the oral polio vaccine — gave a speech at the Rotary Annual Convention. Sabin laid out his vision for Rotary to take a leading role in eradicating the disease through fundraising, grant-making and providing legions of trained volunteers to administer the vaccine to children around the globe.

Rotary stepped up to Dr. Sabin’s challenge, mobilizing tens of thousands of members in dozens of countries. In 1985, it established PolioPlus, a program dedicated to eradicating this disease that was paralyzing about 350,000 children each year.

In 1988, the world joined Rotary’s fight, as member states of the World Health Organization (WHO) voted to make polio eradication a global health priority at the World Health Assembly. This led to the launch of the Global Polio Eradication Initiative (GPEI), spearheaded by Rotary, the WHO, UNICEF and the US Centers for Disease Control and Prevention. The Bill & Melinda Gates Foundation was honored to join the effort in 2007.

Since then — thanks to the tireless efforts of governments, aid agencies, public service organizations and millions of frontline health workers — the number of polio cases has been driven to a vanishing point. Just 37 cases were recorded last year. But until we reach the magic number of zero and polio is wiped out everywhere, all children remain at risk. 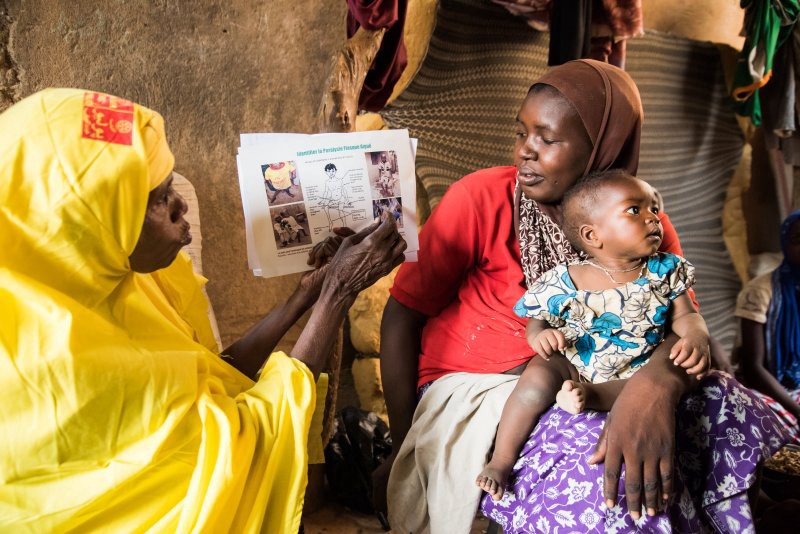 Community health worker Hawa Amadou speaks with Roukaya Souley holding her son Roumaissa Haruna at a family's home in Dosso, Niger. Hawa says, "It's been 30 years since I have been undertaking this work, since the creation of the district health center in Dosso. I undertake social mobiliziation activities for malaria, tuberculosis, malnutrition and polio. I enjoy my work because I want to help my community. I trust them and they trust me." April 2017  ©Gates Archive

As the world nears the end of the fight against polio, it’s fitting that we return to the same forum that launched Rotary’s global focus on eradication: the annual Rotary International Convention, which now draws more than 40,000 Rotarians from around the world. This year’s convention returned to Atlanta, Georgia, the city that first hosted this gathering exactly 100 years ago. It is also fitting as the U.S. has long been the largest government donor and a leader on polio eradication.

Today, I joined Rotarians at the convention, and it’s clear to me that they remain as fiercely committed as ever to seeing the end of this disease.

Donors from around the globe, including Canada, the European Commission, Japan, Germany, and the United Arab Emirates, collectively pledged $1.2 billion toward polio eradication. Governments of the last three polio-endemic countries — Pakistan, Afghanistan and Nigeria — also reaffirmed their commitment to ending this disease once and for all.

While some in Washington today are urging cuts in foreign aid — investments that amount to less than one percent of the U.S. budget — these new pledges send a strong signal to the world: investing in children’s health is worth it and makes us all better off.

And there is so much more we can accomplish by continuing to support critical programs. In fact, we can reduce child deaths another 50 percent by 2030 if the United States and other governments continue to invest in vaccines, maternal and newborn health, and the prevention and treatment of HIV, tuberculosis and malaria.

Of course, this is something Rotarians know well. I’ve spoken with Rotary Clubs around the world, and have always been inspired by the strong sense of optimism they each feel toward winning the fight against polio. Rotarians understand that helping citizens of other nations fight poverty and disease makes the world more stable, makes Americans safer, and creates friendship between people of goodwill everywhere.

Now let us follow in Rotary’s footsteps, and ensure a peaceful and prosperous world for all of us.