Where we are now and what it will take to reach eradication
Story Written By:
Diana Schoberg
Story Photography By:
Illustrations by Gwen Keraval

As the number of polio cases approaches zero, the challenges facing Rotary and its partners in the Global Polio Eradication Initiative are changing. We still need to reach every child with the polio vaccine – and we’re using innovative strategies to do that, in spite of geopolitical uncertainties. But that’s only one part of our job. We’re tackling vaccine-derived poliovirus, which can begin to spread in places where vaccine coverage is low. We’re becoming disease detectives, following up on any shred of evidence that wild poliovirus might still be circulating. And we’re fine-tuning our plan to keep the world free of polio forever.

Here’s what you need to know about where we are now.

• Polio is an intestinal virus that is spread through contact with the feces of an infected person, which can contaminate water or food.
• The poliovirus is a single positive strand of RNA enclosed in a protective coating called a capsid.
• There are three variations, or serotypes, of the poliovirus. They differ in their outer coatings.
• The few cases of wild poliovirus that we see now are all of type 1. The last case of type 2 was in 1999, and the world was certified free of type 2 polio in 2015. The last case of type 3 was in 2012.
• The virus infects only humans, mainly children under five because they are least likely to be fully vaccinated. There is no cure.

How we get infected

1. The virus latches onto a receptor on the surface of a cell, multiplying in the lining of the intestines.
2. It enters the cell and hijacks the cell’s own machinery to make copies of itself.
3. The virus is released to infect neighboring cells, spreading from the digestive tract to lymph nodes and the bloodstream.
4. The virus replicates and is excreted through feces, starting the cycle again.

Rotary and its partners worked to reach 430 million children in 39 countries during polio immunization campaigns in 2017. 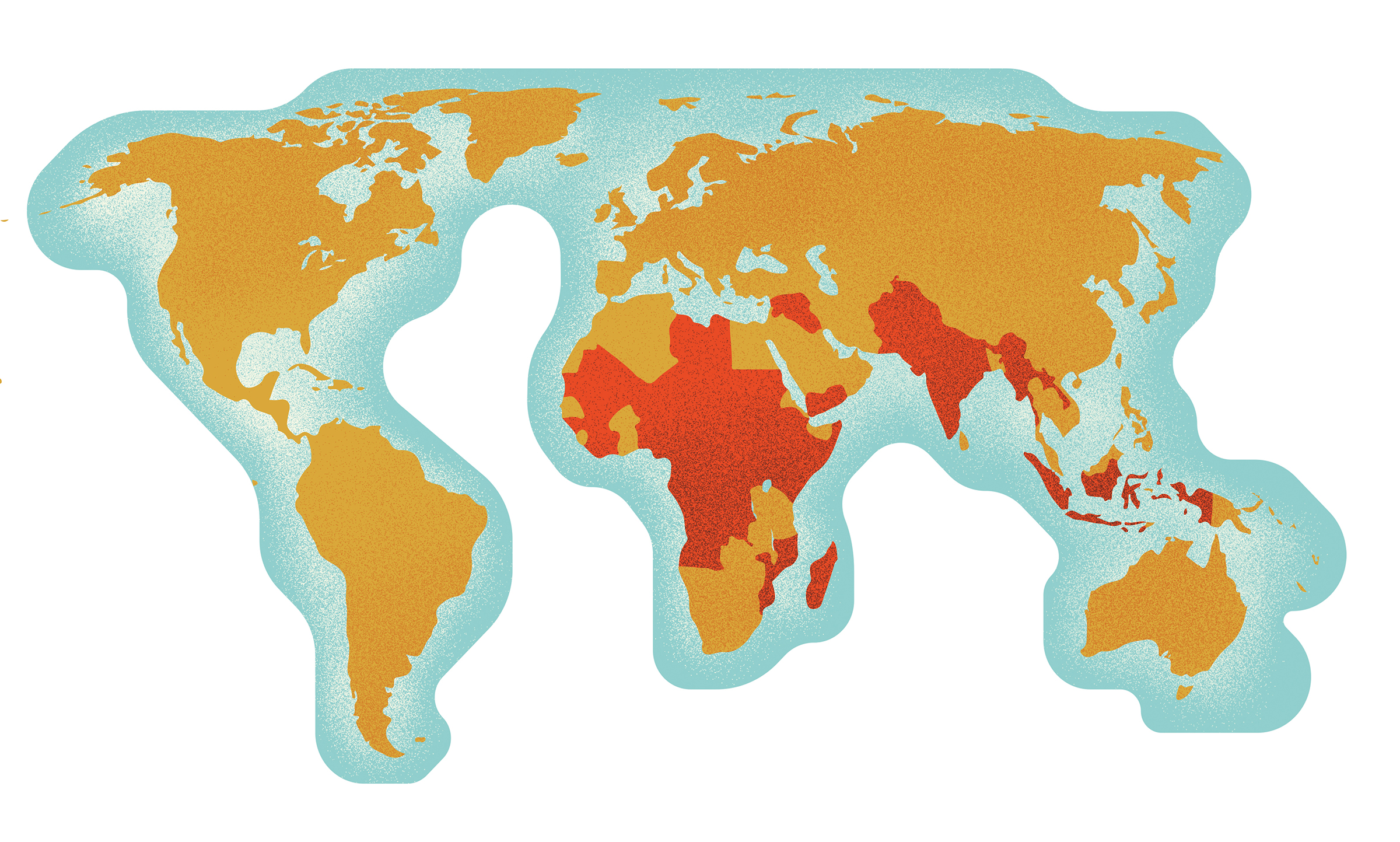 The Global Polio Eradication Initiative (GPEI) uses the oral polio vaccine in immunization campaigns. It’s made from strains of the poliovirus that are live, but weakened.

This weakened virus multiplies in a child’s gut, stimulating an immune response in the lining of the intestines. Then the child excretes the vaccine-virus in his or her feces.

That is usually a good thing: Other children are then exposed to the weakened vaccine-virus in the environment. This exposure stimulates their bodies to create the protective antibodies as well. It’s a way to indirectly induce immunity in children who may not have been reached by health workers with doses of the vaccine.
In places with low immunization rates, the weakened vaccine-virus can begin to circulate. In rare cases, it mutates back into a more virulent strain that can cause paralysis. This is called vaccine-derived poliovirus (VDPV).

Since the switch, there have been outbreaks of circulating vaccine-derived poliovirus (cVDPV) from the type 2 strain in the Democratic Republic of Congo, Nigeria, Somalia, and Syria. The GPEI has a stockpile of monovalent type 2 vaccine to use to stop these outbreaks.

High immunization rates are the best protection against both wild and vaccine-derived polioviruses.

We search out the poliovirus wherever it hides.

Scientists look for evidence of the poliovirus in the environment to learn more about how it is circulating...

Most children infected with the poliovirus don’t show symptoms, but they still excrete the virus in their feces for several weeks.

1. Workers collect water samples near sewage treatment plants or, in areas without adequate sanitation, other known sources of wastewater such as open canals and streams.
2. Samples are kept cold during transportation to a lab that is part of the Global Polio Laboratory Network.
3.Virologists test the samples for poliovirus.
4. If virologists confirm the presence of a poliovirus, they carry out further tests to determine the exact genetic makeup of the virus and whether it is wild or vaccine-derived.

...and health workers track the children who show symptoms to see if they are caused by the poliovirus. 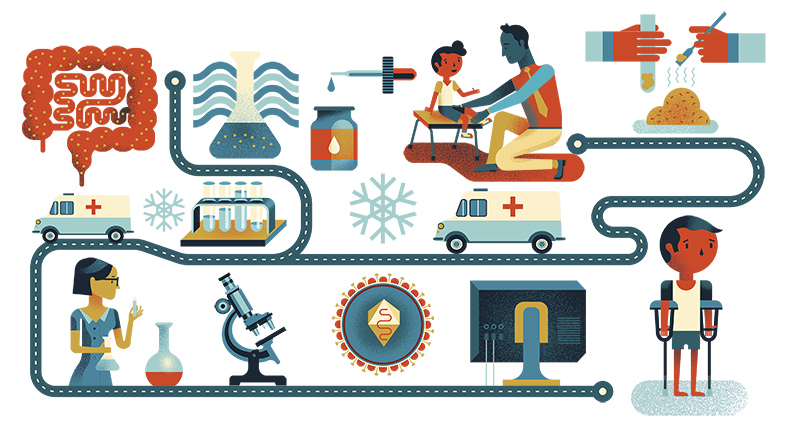 1. A child under age 15 experiences sudden, unexplained weakness or paralysis, known as acute flaccid paralysis (AFP). Most cases of paralysis are not caused by polio, but we investigate them to be certain.
2. A doctor or other community member such as a traditional healer, pharmacist, or cleric reports the case to medical authorities.
3. Samples are kept cold during transportation to a lab that is part of the Global Polio Laboratory Network.
4. Doctors collect a stool sample within 48 hours of the onset of paralysis, and another one 24 to 48 hours later.
5. The scientists compare it against reference samples of known polioviruses. Because viruses from different regions have slightly different genetic sequences, the virologists can map where the virus came from – whether it was local or came across a border or from farther away.
6. Health workers use this information to figure out the best immunization strategy to prevent further spread.

The scientists who identify the virus work in one of the 146 labs accredited by the World Health Organization, in 92 countries, that make up the Global Polio Laboratory Network.

123 subnational and national laboratories are the front-line facilities that test stool and sewage samples
17 regional reference laboratories distinguish between wild and vaccine-derived poliovirus and determine the genetic makeup of the virus
6 global specialized laboratories determine the genetic makeup of the virus, and prepare and distribute the chemicals used in virus testing
In 30 years, we’ve gone from 125 polio-endemic countries to 3
17.4 million people who are currently healthy would have been paralyzed by polio without our eradication efforts since 1988

The Rotary Foundation awarded nearly $700 million in PolioPlus grants from 2010 to 2017. Vaccines are largely covered by other donors, so Rotary provides funds to cover the gaps.

$308 million: Operational support including stipends for the millions of community-based vaccinators who administer the vaccine and perform house-to-house follow-up visits
$132 million: Technical assistance including salaries for health and immunization professionals such as field officers and cold chain managers
$141.4 million: Social mobilization to raise awareness of the vaccination campaigns and the benefits of immunization
$72.5 million: Surveillance for disease detection, including the Polio Laboratory Network
$20.4 million: Vaccines
$16.6 million: Research into new ways to facilitate eradication

And we have a plan for keeping the world polio-free forever.

Interruption
• Detect the last wild poliovirus in an individual or the environment.
• Continue immunizations, surveillance, and responses to outbreaks of vaccine-derived poliovirus.
• Begin to transition the resources that the GPEI created to support other health priorities.
Certification
• Certify the world polio-free.
• Dissolve the Global Polio Eradication Initiative.
• Reduce the number of laboratories and vaccine-manufacturing facilities that store the poliovirus and ensure stringent safeguards for those that continue to handle the virus.
• Hold high-quality immunization campaigns to create a firewall of immunity in advance of the withdrawal of the oral polio vaccine.
Transition
• Stop using oral polio vaccine concurrently     in all countries to eliminate the risk of vaccine-derived poliovirus and begin to immunize children using only the inactivated polio vaccine in routine immunizations.
• Continue surveillance; after the world is polio-free, environmental surveillance will be increasingly relied on.
• Respond to outbreaks of vaccine-derived poliovirus, which could circulate for severalyears after ending the use of oral polio vaccine.