After another year of dwindling polio cases, Rotary leaders, top health experts, and celebrities said on 24 October — World Polio Day — that the paralyzing disease has never been closer to being eradicated globally.

A special livestreamed presentation — End Polio Now: Countdown to History — featured the people who work tirelessly to end the disease and reviewed the progress that the Global Polio Eradication Initiative (GPEI) has made.

Co-hosted by Rotary and the Bill & Melinda Gates Foundation, the 45-minute program took place before a live audience at the Gates Foundation headquarters in Seattle, Washington, USA, and was streamed online to viewers worldwide, and a recording is still available. Mark Wright, news host for the local NBC television station and president of the Rotary Club of Seattle, led the event.

Wright updated the audience on the latest figures of polio cases saying that that the total number of cases caused by the wild poliovirus so far this year is 12, with seven cases in Afghanistan, five in Pakistan, and none in Nigeria. This is a 70 percent reduction from 2016 and is the lowest count of polio cases in history.

“The scale of the effort is staggering,” he said. “Every year 2.2 billion doses are delivered to 430 million children, through a sophisticated vaccine supply and logistics network.”

Sue Desmond-Hellmann, the Gates Foundation’s chief executive officer, began the event by praising Rotary members and front-line health workers for their dedication to ending the disease.

Desmond-Hellman said, "Nothing would be possible without the efforts of thousands of volunteers across the world who, somtimes in perilous situations, deliver and adminster polio vaccinations."

She added, "Those unsung heroes are in the company of Rotarians. Everywhere around the world, Rotarians show us with their quiet, but inspiring determination, how you can make it possible for 16 million children to be alive and walking."

At the Rotary Convention earlier this year, the Gates Foundation and Rotary renewed their long-standing support for ending polio: Rotary committed to raising $50 million per year over the next three years, with every dollar to be matched by two dollars from the Gates Foundation. The agreement will yield to up to $450 million for eradication efforts.

Rotary has spent more than $1.7 billion on polio eradication since 1985. Earlier this month, Rotary gave $49.5 million in grants to support immunizations and surveillance activities led by the GPEI. 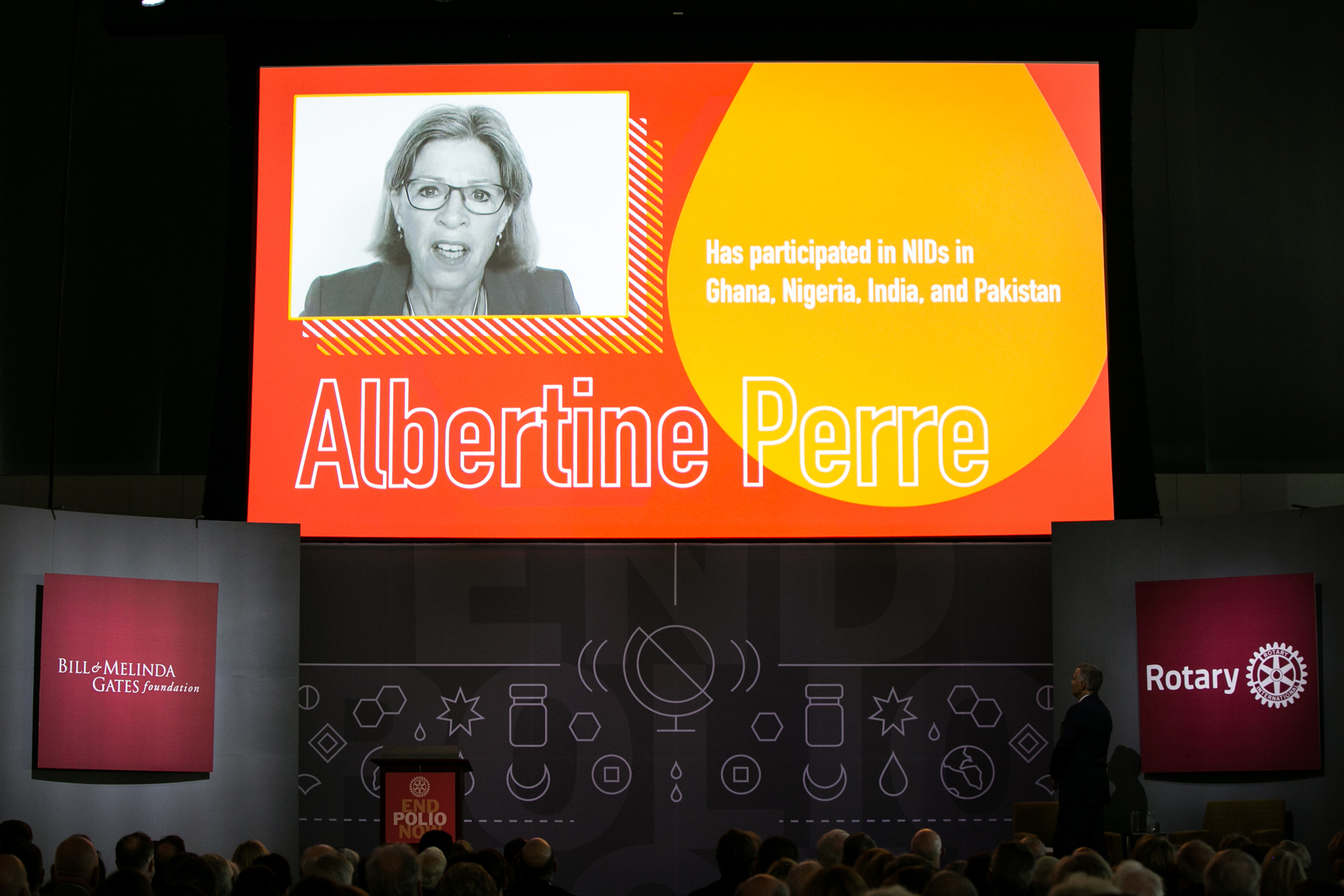 Rotary Vice President Dean Rohrs took the stage to highlight some Rotary members who are raising funds for polio eradication in creative ways. One example was the Rotary Club of Viljoenskroon, South Africa, which is putting End Polio Now piggy banks in local businesses. Members of the Rotaract Club of Curitiba Oeste, Paraná, Brazil, put on a rock concert and donated all ticket sales to End Polio Now.

Rohrs said that Rotarians are holding more than 2,700 events like these worldwide for World Polio Day. “Today is about recognizing those forgotten stories and highlight our unsung heroes: Rotary members.”

She added, “bridge different cultures to reach every community. We persuade parents that two drops of vaccine are critical to each child’s health. We participate in national immunization days on a huge scale, like in Pakistan where we have protected more than 40 million children under the age of 5. And we also spread awareness and raise funds for the cause.”

"Immunizations are estimated to save low- and middle- income countries $20 billion each year," he said.

According to Kopf, the benefits of polio eradication spending will outweigh the costs by nearly $50 billion between 1985 and 2035. And in that time, 8 million lives will have been saved.

In a question-and-answer session, Jeffery Kluger, science editor at Time magazine, and Jay Wenger, an epidemiologist and director of the Gates Foundation’s polio eradication efforts, talked about the latest developments in the polio eradication fight.

"The bottom line here is we have to reach every kid with the vaccine. That's our target," Wenger said.

Polio partners have agreed that they won't say the world is polio-free until traces of the virus are no longer detected in the environment, even if cases of polio-related paralysis disappear before then.

The event included a showing of the trailer for “Breathe,” a feature film that tells the story of British polio survivor Robin Cavendish, who contracted the disease in Kenya in 1958. Paralyzed from the neck down, Cavendish and his wife, Diana, spent the rest of his life advocating for people with disabilities.

The film’s stars, Andrew Garfield and Claire Foy, and its director, Andy Serkis, encouraged the audience by video to keep up the fight to end the disease.

In his video address to the audience, Adepitan said the day the world is declared polio-free could be “the greatest day of the human race so far.”

Entertainment included a video that featured celebrity adventurer Bear Grylls, who explained the cold chain needed for polio vaccinations. The audience also watched a video that showed how surveillance is playing a crucial role in finding where poliovirus is circulating. The event closed with a video of Rotary members saying what polio eradication means to them.

"We don't have barriers, we don't have borders, we can promote peace, and we can change the lives of so many people," said Claudete Sulzbacher, of the Rotary Club of Santa Cruz do Sul, Rio Grande do Sul, Brazil, who has organized more than 1,600 fundraising events. 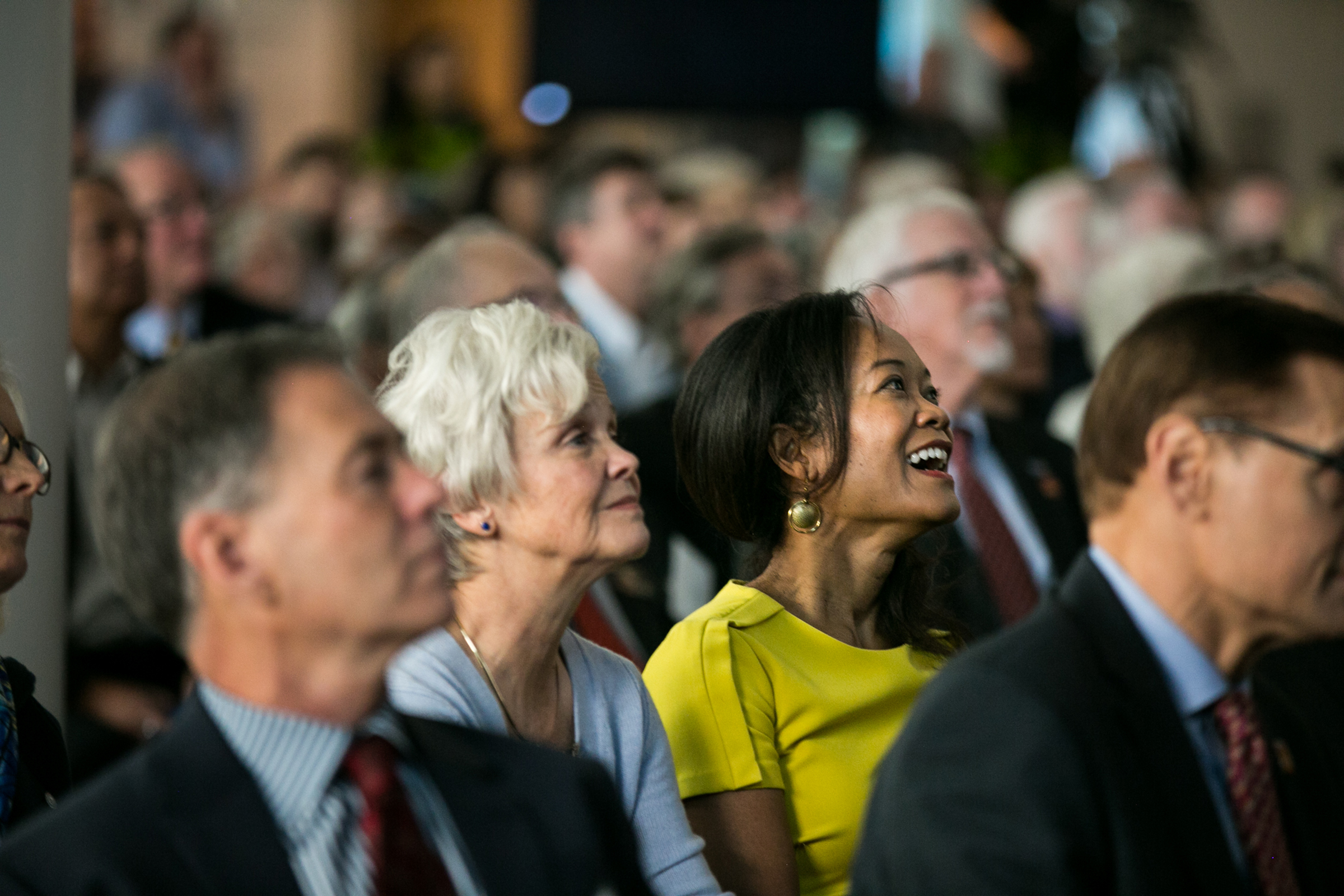